Have you ever heard a really bad story told by a four year old? Some of them are very cute, just adorable, but they all tend to have the same theme, a tale completely devoid of context, lacking all meaning, and having no punchline.

A four year old’s story sounds much like, “A priest and rabbi walk into a bar. The end.” Then we all laugh because that’s the funniest thing ever, even if it is a tale totally lacking all structure and form.

Lately it seems to me as if much the world’s tale is being written by a four year old! I’m desperately trying to find some structure, meaning, and context to things that are just nutty and off the wall. That’s the story of my life really, but it seems as if the chaotic and nutty is now devoid of form and dominating our immediate neighborhood.

So the Seattle mayor, City Council, Police Chief, and probably the state Governor too, are pretty much all anti-cop and whole heartedly pro-protests and even perhaps, pro-rioters. It’s been this way for a long time, too. WTO, May Day Riots, you name it, it’s been our thing for as long as these guys have been in power. Apparently the cops at the East precinct in Seattle had enough, because they just boarded up the cop shop windows with plywood, sprayed the building down with fire retardant, and went home.

A bit amusing, a bunch of protesters then determined that it was their job to, “occupy and dominate the building” to make sure it doesn’t get burned down by “outliers and radicals,” which would in turn make them look bad. So there ya go, a bunch of protestors and rioters suddenly policing the neighborhood, forced to protect and serve, to try to maintain the peace. One honest fellow spoke the truth, “I don’t know what we’re doing, why we’re here, or where we’re going with this. We’re awaiting direction.” I had to laugh, that guy’s heart is in a good place, but he is just such a NPC, a non player character in a story being written by a four year old.

I took a hike one day and got stalked by a coyote.  It doesn’t take much to intimidate me and this guy was slinky, fearless, down low like a predator. He got about ten feet away and I have no idea what possessed me, but I turned around slowly and said, “Would you like to talk about my Lord and Savior, Jesus Christ?”  That poor critter jumped about 3 feet in the air and yelped. I yelped too, and he took off so fast all I could hear was the rustle in the leaves.  I actually felt bad for scaring him.

Many people are like that, too! Many Christians, even. Pastors, too. We often want to talk about Anything But Jesus. Often the cure for what ails us becomes Anything But Jesus. The cure for what ails us is counseling, therapy, mental health services, better politicians, legal reform, social justice,  defunding cops, access to medical care, housing, more education, a better job, self help books, a better marriage…..

Don’t get me wrong, some of those things can be useful tools, but without the Gospel first, without Jesus, we lose our ability to love people properly.  Our story begins to crumble and fold, it becomes devoid of form and substance, as if it were a tale being told by a four year old.  Our lives lose their context and meaning, they become devoid of that structure that gives us purpose, and we become much like that protestor, full of enthusiasm, having a good heart, but really just a non player character in a story being written by a four year old, anxiously awaiting direction.

Preach the Gospel, over and over and over again. Jesus fixes everything. Indeed, He is the only One who ever has! Don’t be like that coyote and shy away from talking about Jesus.

And for crying out, don’t be a NPC. God gave you a brain for a reason. 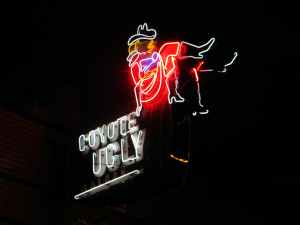 9 thoughts on “Bad Stories and NPC’s”