Photo by luizclas on Pexels.com

Today I feel compelled to clarify something regarding  my campaign against the wrath-mongers of Christianity. With all good humor here, and as gently as I can, but sheesh some people are like, No, you’ll pry the wrath of God out of my cold, dead hands….

The very thought kind of freaks some people out. I feel a bit like an evil mom just trying to wash a kid’s disgusting, sour milk encrusted security, blanket. Like chill out people, you can have your Godly wrath back right after I’ve washed it clean. Promise!

What is a wrath-monger? Somebody who traffics in the wrath of God, somebody selling fear, power, and control as a way to force conformity and terrorize people into compliance. You see this sometimes in street preachers, although not all, some are very cool, some are simply awesome. But the guy screaming about hell who hisses “Jezebel” at you when you walk by, that’s a wrath monger. Most of them are far more subtle, more nuanced and complex. Some wrath mongers I even love and respect, I just happen to be certain they are wrong.

Some of us who come from the school of hard knocks, can recognize human fear, power, and control, for what it is no matter what form it takes. It is a weak and fear based manipulation tactic. An anxiety ridden symptom exhibited by the powerless to try to control the even more powerless.

God is not weak and powerless. God has no need to control or force us into anything, because He is already all powerful. He may well give you a nudge, or strongly encourage you, or send a whale to swallow you up, but there is no panicked, anxiety ridden, violent reaction to losing control, because God is sovereign already.

People will often confuse bullying and abuse with power and authority and than remake God into that same image. God as cosmic child abuser who tortured his own Son because He was enraged at us, His wrath so vast He slayed an Innocent and it’s all your fault. That is a totally false understanding, a misconception, a lie, but oh boy is it prevalent across the culture in various forms.

Nearly every  single atheist, agnostic, nonbeliever, or backslidden, lukewarm, Christian pew warmer believes some version of it, “God hates me, God is punishing me, God is angry at me.” Then right on schedule along comes the wrath mongers with their,  “God hates you, beware the wrath, you sinner,” and the accuser of the brethren has just been affirmed and validated.

It hurts our witness, it separates people from Jesus, and it misrepresents the true nature  of the Lord. God loves you, flaws and all, and He loves you lavishly. Read the Book of John.

Worst yet, people can confuse “wrath”” with discipline” as if they are one and the same. That’s a tragedy here on earth, but it is ten times as tragic when that attitude is projected onto God Himself. Discipline means to teach, it is the same root word we get “disciples” from. Jesus never unleashes His wrath on the disciples.

The lazy servant is motivated by fear and he believes the Master is a hard man. We could probably call him a “wrath monger” because no doubt he’s selling everyone else on what a hard man his Master is and to be afraid, be very afraid.  It doesn’t go well for the lazy servant. The Bible tells us the Master says, “throw that worthless servant into the outer darkness, where there will be weeping and gnashing of teeth.”

The Lord disciplines those He loves, very true. I have no dispute with that truth! The opposite of love is not hatred, it is actually indifference. The Lord is not indifferent towards us at all. In fact, some of the words we have translated in the Bible as “wrath,” are more firmly rooted in words often translated as, “intense desire,” “passion,” and “longing.”

The Lord is gentle and infinitely kind to me. I’ve told stories of bumping into the Lord’s discipline before and it is not scary at all, in fact it is delightful. I usually laugh, not because I think it’s funny, but because it catches me totally off guard and I wasn’t expecting it, I did not see it coming. For example, I have a pretty good hubby, but this morning I was about go kick him in the shins, so I got up to walk across the house and give him a real piece of my mind, when all of a sudden a woman’s voice came into my head, and announced in the best melodramatic Shakespearian, “my beloved’s grief is my own.”

I nearly choked on my toast! I assure you, it was quite funny and unexpected. He definitely needed to be snapped at, but apparently that was not supposed to be my calling at the moment, so I let it go. 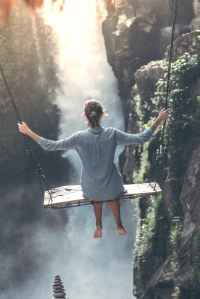 Photo by Artem Beliaikin on Pexels.com

Everybody has a ministry. I guess my heart is soft towards those who have father fractures, who have abuse histories, those who have been wounded by the church, those who are separated from the love of Jesus because of lies and deceptions. I have the eyes to see those things, the ears to hear them, and a certain kind of fierceness about seeing to it that someone speaks the Truth for them.

If we traffic in the wrath of God, I wouldn’t be the least bit surprised if we reap that wrath ourselves, too. But if we traffic in His grace instead, not only can we help to heal a broken world, but we’ll reap His grace and favor, too.