“The old Fairy Tale makes the hero a normal human boy; it’s his adventures that are startling; they startle him because he’s normal. But in the modern psychological novel the hero is abnormal. Hence the fiercest adventures fail to affect him adequately, and the book is monotonous.”….. G K Chesterton

Right??? Oh my goodness, I cannot tell you how much this truth afflicts my soul! It’s a bit funny, but what is wrong with IB? Finances, family, health…. the general decline of Western civilization??

Nope, as usual she is just furious over what a complete mess we have made of fairy tales and prone to long spells of melancholy and frustration over it. I’ve written about this matter extensively in dozens and dozens of posts, some of which can be found  here, here, and here.

And by “fairy tales” I pretty much mean fiction, books, comic books, movies. I still read, extensively, but it is becoming harder and harder to find those tales of ordinary heroes, as if to say, “She was rather plain and normal, there was nothing special about her at all. Quite a boring girl, really.”

Ahhh, now that’s what makes an adventure so grand….

Everyone these days is a billionaire, a top-secret agent, a wizard, an elf, or a transgendered alien. GK Chesterton is quite right, “the hero is abnormal,” and since he is so bizarre himself, “the fiercest adventures fail to affect him adequately, and the book is monotonous.”

Exactly. It is a very good lesson in writing, too. 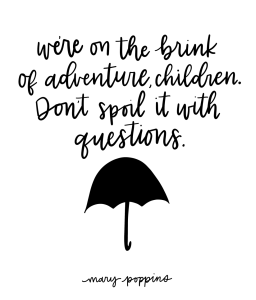 We modern people have become very jaded, somewhat numbed out, exposed to way too much knowledge and not nearly enough wisdom. Try to explain to people that privacy is gone, that the government and other entities are spying on us and they’re prone to just go, “Meh, Google, find me Aunt Ida’s recipe for chocolate cake.” We’re just a generation who have had all our conspiracy theories come true. The “fiercest adventures” now fail to affect us adequately.

And so “Identity” is now completely replacing adventures and overcoming, and what challenges the characters face have become secondary to an almost narcissistic snap shot of who they already are. It’s just a hero selfie. In the latest Star Wars movie for example, the Jedi is a woman and that’s pretty much the beginning, the middle, and the end of the tale. She has simply been dropped onto a stage set for a hero selfie.

I went to see the remake of Mary Poppins Returns, a pleasant afternoon for sure, so don’t feel sorry for me, but it really jumped out at me how much we are really losing. No offense to Emily Blunt, but she was simply yet another hero selfie, taking on the identity of Mary Poppins, the entire movie being much like a series of selfies and stage sets, props and poses, complete with plenty of Poppins swag. But it was completely devoid of that Poppins edge, why she was the way she was, what she taught the children, why it all mattered, how they changed and began to see the world with fresh eyes….

Sigh.  Alas, there was a cleverly placed song that did sum up my mood very well, my mood about the nature of our modern fairy tales and what we are losing in the process, a song called , “The Place Where Lost Things Go.”

11 thoughts on “Ordinary Heroes and Where the Lost Things Go….”