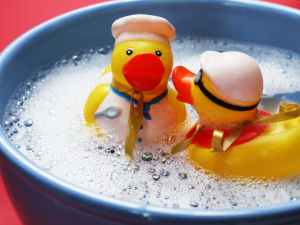 First off, let me say the truth of what it means to “assume things” is hidden right in the very word itself, “ass u and me.” It is the way of the donkey, the path to confusion.

A pastor I know more graciously explains it as, “don’t ALL.”  All women are like that. ALL fundamentalists are self righteous. ALL atheists are stupid. “How could any good thing come from Nazareth?” Right? Because they are ALL like that. “All” is always a deception, it is our brain trying to short hand, categorize, and place people in boxes. We actually cannot know “all,” because “all” is a really big number beyond our experiences. “Some” is a number more closely aligned to the truth.

That’s the first part of the story. We should always question our own assumptions, because they are often all full of deceptions and untruths. Don’t ALL.

The second part of the story however, is that I am a fact checking, Venn diagram producing, power point presenting, queen of countering all false assumptions. No joke, I got linkys, facts, and objective truth on my side, and I’m really good at it. Also, years of practice and experience.

And yet God said, “stop.” Turn completely around, I don’t want you to counter false assumptions anymore. This did not go over so well with me. Did I mention that I am very good at it? All in good humor here, but it’s a bit like cursing and swearing. Why in the world would God want to waste all that beautiful talent??

So the struggle is real, but I heard Him, and eventually I obeyed and began to catch on. My countering false assumptions was actually all about me. I had this crazy idea that if I just presented people with the facts, they would turn away from their false assumptions, and good job on my part.

What I had failed to understand is that head knowledge is not heart knowledge. Facts are completely meaningless if they don’t reach your heart. I can give great advice even to myself, well reasoned, factual truth, truth everyone agrees with. And then just completely ignore it! Don’t eat that cookie, the facts and objective truth say it’s bad for your blood sugar. I completely agree with the facts, and yet I’m going to just eat the darn cookie anyway.

That’s a lot of “nevers” in that paragraph by the way, so take them with a grain of salt. We could probably find one or two in the world somewhere if we just dug hard enough. The point being countering false assumptions is an incredibly ineffective way of trying to lead people towards the truth. It is not productive. It just flies in the face of human nature and tries to run counter to human behavior. Head knowledge is simply not heart knowledge.

God said, stop trying to counter false assumptions. Learn to understand them. Learn to empathize with them. Actively listen to the person saying them. Validate them even, to indicate you’ve heard them. Don’t be offended by things like, “ALL Christians are self righteous hypocrites.” Don’t think you can “fix that” by posting a bazillion counter points proving how awesome Christians really are. It ain’t all about you IB and defending your own alleged perception of “truth.”

Seriously, God said that. It ain’t all about you, IB. He was right, too. I wasn’t really trying to love another person and bring them closer to the truth, I was simply glorifying my own skills and delighting in how right I was. I am usually “right” too by the way, but it doesn’t even matter when it comes to enabling someone else to find the truth.

The point being, being factually correct, does not make you morally right. The bible affirms this truth. You can speak with the tongue of men and angels, you can have a beautiful theology,  you can be in possession of all the facts and figures, and be flat out wrong. No love, no moral rightness. No love, no moral rightness, and no moral authority either. Your facts are irrelevant. God calls us to love one another, not to idolize our own “facts.”

It was tough lesson on the pride too, and took me way out of my comfort zone. When someone says, “ALL Christians are self righteous, hypocritical nimrods,” what they really mean is “some are.” My experiences have led me to that conclusion. The enemy has also helped me to confirm my own biases in this area. The hard facts or objective truth is not going to dissuade me, because my reality is different from yours.

I just wanted to slam them upside the head with evidence and truth that said “uh, uh most Christians are good people and you’re wrong, and all is now well my world because I have now conquered you with the truth.” My world. It was totally all about me. I did not want to come alongside them with some empathy and to traverse the world of really appalling Christians who might actually lead someone to that quite rational conclusion.

The truth was, my truth was actually rooted in denial and fear. I don’t like traversing the halls of white supremicist Christianity, white nationalistic Christianity, child abusing Christianity, wife beating Christianity, red pill Christianity, and my personal favorite, deeply sexually perverse Christianity. I much prefer my land of rainbows, unicorns, and sparkles where we’re all kind to one another because we all desire to reflect Jesus Christ. And that really is my world too, but it is only my corner of the world, it is only a part of the “truth.”

I did not want to traverse these waters because it’s really painful, because it’s going cost me something, because it rocks my own faith. Because it takes me out of my comfort zone and forces me to confront my own fears and to ask some hard questions. Love hurts, but if you’re going to love people properly, you have to be willing to hurt right alongside them.

We are not called to deny someone’s reality, we are called to step into it with them, and to offer them a hand. That is what it means to come alongside someone.

Galatians speaks to this truth, “Bear one another’s burdens, and so fulfill the law of Christ. For if anyone thinks he is something, when he is nothing, he deceives himself. “

So does 2 Corinthians, “Who comforteth us in all our tribulation, that we may be able to comfort them which are in any trouble, by the comfort wherewith we ourselves are comforted of God.”

We aren’t helping someone else to heal, comforting them as we have been comforted of God, when we just try to change their reality with what we believe are facts that will magically counter all their false assumptions. That is actually just really disrespectful.

I’ve learned this lesson slowly, and painfully sometimes, but I am certain of it, and I think the bible confirms it. Being factually correct, does not make you morally right. You are not going to be suddenly graced with moral authority, simply because you believe you have all your ducks in a row and the facts on your side.

Go try telling an alcoholic, “You know what your problem is? You drink too much.”  I bet he had no idea. I bet that is just what he needed, some brilliant person to come along and point the facts out to him. Now you can just go pat yourself on the back for your superior wisdom and ability to solve all the world’s problems….

“Believing themselves wise, they become fools.” That is also in the bible. The facts are about as helpful as those rubber duckies all lined up in a row before you. Good for your own pride and pretty to look at, but completely meaningless. The Pharisee and Sadducee had the facts and the law and the truth too, and yet they missed the Truth of the Lord standing right in front of them. In fact, the pharisee spent all their time trying to trip Jesus up, trying to counter His assumptions with facts.