There’s a piece around the concept of justice that is often missing in the faith world, one I don’t even fully understand.  I’ve read and heard many beautiful things about forgiveness and grace, biblical, wonderful, healing things.

But it’s just not the whole story….

Much less common, but I’ve also seen forgiveness weaponized, convoluted, misapplied. That is where you a have a bullying situation, an abusive situation, an injustice that continues unabated and we tell the victim to just turn the other cheek. Just love on them there bad guys. Yes, but…wait a minute. Where is the truth in this, where is the love for the one being harmed? Where is the justice?

Well, you just have to forgive.  I get that, I’m there even, but we still have a moral and just God. That means He cares about justice and does not expect us to just endure, tolerate, and suffer wrong doing in perpetual, virtuous silence. I have said a few times, by His stripes you are healed buddy, not by mine.  I’ve meant it, too.

This isn’t about salvation or heaven or hell. I’m not talking about punishment, but rather the Lord’s restorative, redemptive, and healing justice. Justice for the hurting. The broken-hearted. The wronged.

(‘Bad guys’ is also a genderless analogy. Some of the hardest people to forgive can be women.)

I also understand that we’re all “bad guys,” that the bad guy is lost too, that somewhere deep within the soul of bullies there is wounding too, and that Jesus does forgive, that the blood of the Lamb is powerful enough to cover anything. Anything, I mean that.

However, I really dislike the moral ambiguity that sometimes tries to imply, well we’re all sinners so that guy’s sins aren’t any worse than yours. Yes but….that can actually be a cop-out, an abdication of justice. It just sits there like a soggy plate of overcooked pasta, unwilling to take a stand and speak the truth. Name the evil, for crying out loud. Speak what has somehow become unspeakable.

About ten years ago, the Lord really pulled me out of the closet on this issue. He said, Stop. You’re totally missing the boat here. This isn’t what my justice looks like at all. I’m a forgive and forget Christian, a just let it go Christian, but what I had been doing was just swallowing bitter. Injustice had become such a way of life, that I just surrendered all and accepted it as The Way Things Are.

I was literally just drooping, worn out, wilted, weighed down by the weight of chronic injustice, unfairness, powerlessness.  Sheer hopelessness. God is faithful however, and I can so trust in Him to take care of me. Which is exactly what He did.

The Lord took a few of my established beliefs and just flipped them on their head. I love it when He does that, He is like the Lord of all surprises. “Be ye angry and sin not,” was one of them. I’d always heard the “sin not” part but never the, “be ye angry” part.

In the face of injustice we are not called to just swallow bitter. The proper response to injustice, also known as evil, is to “be ye angry.” If we try to leapt to forgiveness or acceptance without acknowledging the harm that has been done, without asking the Lord for our own restoration, for our own healing, for Him to replace what has been stolen, ten times over, we are just swallowing bitter.

Swallowing bitter. Casting our pearls before swine. The Lord will hand us beauty for our ashes, but not if we can’t hand Him our ashes first.

It’s also okay to get angry about the injustice of “things,” rather than people. Yes, God is sovereign, yes God is in control, but He doesn’t give us things like cancer. Death, disease, decay is not “something we have to just accept.” Death is something that made Jesus so angry He wept and He laid down His very life to save us. He healed people because disease, death, our suffering, was unjust to Him.

People get cranky about this sometimes, they’re like “no, we deserve death, the wages of sin are death!” Well yes, but it is also the Lord’s wisdom and restorative justice that sets us free, that gives us life and life abundant. We didn’t deserve it, but His glory did it anyway.

If the Lord did not find these things to be unjust, He would not have intervened. God is a God of justice and of righting wrongs, even when the wrongs are self-inflicted.

What is it that is often missing in the Western churchian world? Myself, I think it is the very idea of restorative, redemptive justice, the parts of our soul that cry out for justice, for protection, and often just meet a soft Christian world, preaching nothing but forgiveness as if our lives have handed us nothing more complex than the mild offense of finding a few raisins in your apple pie.

I heard that sermon once. Seriously, you need to forgive her for putting raisins in your apple pie, and I thought, no you need to grow up. What kind of self-absorbed, navel gazing, first world problem, actually  needs spiritual guidance on how to handle the disappointment of apple pie?

Restorative means, “having the ability to restore health, strength, or a feeling of well-being.” There’s an old fashioned definition of that word I really like, a  noun. A “restorative” is like smelling salts used to revive someone.

That’s what the Lord’s justice means to me. It is a restorative, it revives us, it is healing, it brings order to chaos and to the moral ambiguity of our lives. It revives us.

Recently someone asked me if I have a gift for justice and I really had to ponder that one. Yes, oh yes, totally, in the way one might heal and revive, point people to the One who can restore what has been stolen, who can call them by name and remind them of who they are. The Lord fixes what is broken.

What breaks my heart is seeing people who have forgotten who they are, forgotten who He called them to be, because they have been overwhelmed by the world’s injustice.

I don’t know what happens spiritually to really rotten people, people who spend their whole life causing harm to others and then have a sudden epiphany, a deathbed confession. I just don’t know. It’s not my problem, only in the sense  that it’s the Lord’s problem, that He is trustworthy, that He will handle it perfectly. What we have to handle is the restoration of those here on earth, those who have been harmed, those who have forgotten who they are.

I had a pastor once who told me the bad people who confess Christ still go to heaven, they just go to heaven as a cobblestone. Everyday we’ll get to wipe our feet on them, walk on their face, look down and say, “Good morning, George!” That’s not doctrine or theology, it’s just a joke, a bit of gallows humor, but it still makes me smile.

Don’t be a cobblestone. 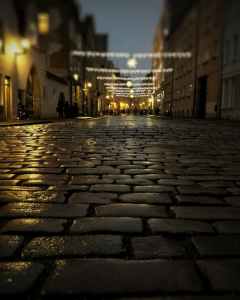 12 thoughts on “Restorative Justice and Cobblestones…”