Submission isn’t passivity. Someone smart recently said, “being passive is how you ensure the other person will always be wrong.”

That resonated with me, and it is a manipulative tactic I have seen women engage in frequently, said with all gentle grace and understanding here. I absolutely have been passive from a place of resentment and anger, manipulation and control, as if to say, fine, let’s do it your way and when it all falls apart maybe you’ll see the error of your ways and repent of your stupidity….

That is not submission, it is more related to abuse and control. All in good humor here, but women are so skilled, we can even learn how to abuse ourselves and others without saying a word. It looks gentle on the outside, but inside we’re actually sticking a fork in your back, because you are so done, you are like that turkey with the little button that has popped up.

Let me repeat that part about grace and forgiveness, because this behavior is somewhat understandable, in the sense that traditionally women have been pushed back into passive/aggressive behavior, that biology and circumstances have caused us to adapt and adopt strategies that are not always healthy.

It’s still sin, in the sense that it’s harmful to us and others, and not representative of what and how God designed us to be. I’d quote all the scriptures that I believe support that, but I think it can be clearly seen in the nature of Deborah, Jael, Esther, and even Sarah. There was a dancing girl once who somewhat passively managed to get a man’s head on a platter, which I think does speak to the potential problems with being passive.

Submission to God is not passive, as in He asks for our active participation. He welcomes our question, He desires our understanding. All in good fun, but I know this from having challenged His authority some 50 thousand times. If God did not desire us to be an active participation in our own sanctification, I’d just be a pillar of salt by now.

It saddens me that the very word “submission” has often been misconstrued to mean “passivity,” both in the context of faith and in the context of marriage, indeed, sometimes woven into the very nature of Christian men and women ourselves. “Passivity” is not gentleness, it is not a fruit of the spirit, it actually means, “the trait of remaining inactive; a lack of initiative.”

“Being passive is how you ensure the other person will always be wrong.” So passivity is actually a form of defiance and rebellion, and those who encourage, demand, or ignore it in their followers, are actually not being good leaders. Good leaders encourage some push back, they create an environment that supports questioning authority.

I don’t wish to imply that blind obedience is never called for. If someone says “duck” with some urgency, just “duck” and ask questions later. I’m just saying, anytime I see a system, a marriage, a church, a person, who does not allow their authority to be questioned, that little button in my turkey just pops up and I go running for my BBQ fork….. 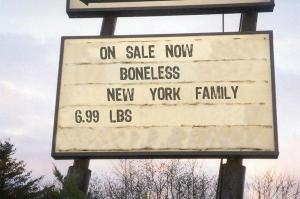